Worth the wait? Yes, absolutely.

IMG_0758 Downtown San Diego
Originally uploaded by midendian
This is downtown San Diego as seen from the approach to KSAN; Adam flew in on Friday and somehow managed to get a great shot of the city.

One of the high points of the weekend was meeting Adam/

midendian for the first time - turns out he's as literate and funny in real life as he is in his writing. I'm very, very much looking to going to LFPO with a stuffed snowy owl next month if Adam's up for it. :)

I took this screen shot Saturday morning: I'd just finished unloading the party rental truck and noticed that my phone was starting to go off with new E-mail every few minutes. It didn't stop for quite some time. I am honored and amazed that so many of you took the time to make a donation to Equality for All to help fight Proposition 8 this November.

PS. If you didn't know about our registry, it's open until polls close in November. :)

"Make sure you have room in your heart for absolutely everybody."

Choosing music for a wedding is - I suppose - a difficult thing. I did so on the morning of the day itself: I had thought about it on and off for a month or two, woke up on Saturday, and decided what we needed was Martin Denny as background music, silence for the ceremony itself, John Cage afterwards (sorry, bad joke: it took just over four and a half minutes to pour a hundred glasses of sparkling wine), and then more Martin Denny during dinner and afterwards. The gentle sounds of his music lent a patina of cocktail party elegance to the day; as a bonus, many of his songs have dropped in bird warbles and other "nature sounds" that blended in perfectly with the garden behind our house.

After the day had formally ended, a small group of friends stayed behind, so I put on some Max Tundra; Mastered By Guy At The Exchange came up first, his second album.

The second song from the album is called MBGATE; its lyrics describe what Saturday felt like as well as I ever could: 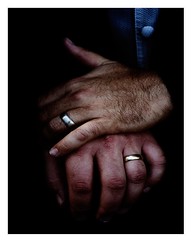 Rings
Originally uploaded by Maverick1303
First of all, let me begin by thanking Matt/

maverick1303 for so generously offering to photograph the wedding (more on that in another post; this one I'll use to talk about our rings.)

If you attended the wedding, you may have noticed two things about rings:

1. I threw out my wedding ring by accident in 2001. I was working in the basement of our San Diego house, so I took off my watch and ring and put them "somewhere safe," which was the small gray trash can I kept in the wine cellar. At some point, I forgot that I had done so - and then presumably emptied the trash. Weeks later, I tried to find the ring and failed.

Dan's is the only one left of that matching set.

In 1985, I left for a year as an AFS exchange student in Essen, Germany. En route to Germany, I stopped off in New York City for one night along with all of my fellow AFS Germany assignees. There, I roomed with a man by the name of Bret Thurwalker from St. Louis, Missouri. He was gay, and as a 15 year old this was of course exciting for me: I had never come out to anyone before then.

Long story short, we developed a close friendship that year - he lived a couple of hours away in Bielefeld - and kept in touch. Dan and I visited Bret and his partner Mark at their home in Kiel, Germany for New Year's Eve in 2000; there, we met Mark's mother and sister, who are both jewelers. His sister (I've forgotten her name) ran a small shop in Hamburg, where we bought matching rings. I don't know what kind of metal it is - something relatively ordinary, probably aluminum or steel - but they were super chunky and kind of awesome. Inside, the word Liebe is engraved in blue lettering.

2. For some reason - probably because we didn't rehearse this - I gave Dan the wrong hand during the ceremony, so he put my wedding band on my right hand (oops). This was bad - I foolishly tried to get the ring all the way on, but I injured that finger playing soccer as a child and it's much, much bigger than my other ring finger. Once I got the dang ring on, my finger started swelling and turning purple. Ouch. Thankfully, I gracefully licked it enough to be able to get the ring back off. If you have pictures of me sticking my finger in my mouth, well, now you know why I was doing that, at least.

I then put it on my left hand where it belongs and it's great. I guess this is why most people rehearse their wedding to death - but I intentionally avoided doing so in hopes of keeping the spirit of "fake it as you go along" that has served Dan and myself so well as a couple for all these years.

Confidential to Yogi: Remember when you saw me buying light bulbs at Albertson's on the afternoon of our wedding? Austin and I hadn't yet finished writing the ceremony. Crazy, eh?

Shortly after the California Supreme Court decided that teh gays can has marriage, our friends started making entirely unsolicited, amazingly generous offers: Xtreem Aaron (who did a bang-up job officiating for Alonso and Dave) offered to officiate for us, Brian Hill's father offered to officiate as well, and many other people simply said "Anything we can do, we will."

Mike Trueblood and Matt Rose, both of whom are actual, honest to God professional photographers, both called us within days and offered to photograph the wedding. Unbelievable. Planning the wedding wasn't trivial, but it was made immeasurably easier because so many people contacted me out of the blue and offered to help. Such generosity isn't something I'm used to, and I fear I'm not good at graciously accepting it, but I'll do my best to publicly thank everyone that helped. [BTW, that's a glass of Mumm Napa DVX rosé. There will be a wine post over at Full Pour at some point if you were wondering what we drank last weekend.]

Whoa, check out that crowd... You know how I know we pulled off a successful wedding? Kim/

"And do you want to know something else that's shocking? All those men, all that bubbly flowing, only one restroom, and I never had to wait once to use the bathroom!"

There is artwork of it:

Only 8 more weeks until it's released!