Mixed in with everything there were a few things that still have some emotional resonance after all these years: the set of dishes (all mugs broken, one bowl broken, but three bowls and eight plates still intact) that I bought when Mark moved in, a few things of my Mom's (a kitsch Bundt cake pan from 1972, a huge, heavy mixing bowl from Disneyland), and then this thing: a cherry pitter that I bought in 1990.

cbertsch. We were both undergrads at Cal; we were both majoring in English. Amusingly enough, we wound up in the same French 1 class, taught by an annoying German. [We didn't realize this until after he busted us for talking crap about his instructional stylings in German after class one day.] We wound up becoming good friends, and he introduced me to his then girlfriend A. Now, I was young and inexperienced and all that good stuff, so when A. suggested that we, ahem, have sex, I said sure, what the heck. Of course, in retrospect, this really is not something you want to do with your best friend's girlfriend, but what the hell, it was Berkeley, I was 19, and it seemed like a good idea at the time.

kdotdammit [who, truth be told, was and is awesome in ways that surprise me every time we meet], I moved to Tübingen, Germany for a year abroad in 1989-90, A. found a new friend in grad school named Joe, and A. thought Joe and I would make good boyfriends, so she kinda hooked us up when I got back in the summer of 1990.

Now, Joe was a handsome guy, but stoner grad students who care just a little bit too much about ST:TNG and S/Z are honestly not the kind of people I should have been dating. Still, I had nowhere else to start, so it went well enough for the rest of the summer.

In the summer of 1990, Twin Peaks was all the rage, so I decided to bake a cherry pie for a party at Joe's in, oh, maybe September or so of that year. That's why I bought this $6 cherry pitter from Whole Earth Access - it was a big deal at the time, seeing as how I was making barely $6 an hour at the student union bookstore. I proceeded to bake a bodaciously awesome cherry pie at his place, and everyone loved it, but the next day he finally admitted that my systematic wrecking of his kitchen caused him no end of upset and for him, it was the last straw of our so-called relationship. This was of course tremendously upsetting - this was not only the first guy I'd kinda sorta dated, but this was the first time I'd been broken up with.

And it was all because of a $6 cherry pitter, sort of. Ah well.

The pitter's in the trash now, waiting for a dump run this weekend. The other stuff, though, I'll keep.

At least I rebounded well from all of that. In early 1991, I placed a personal ad in the East Bay Express, which garnered three responses: one, from Mark, whom I ended up dating for a couple of years; one, from

bix02138, to whom I was so attracted (tall, handsome, librarian-y) that I bolted after a single evening spent together, and one more from someone I never called or met, a man also called Mark who graduated from Lewis and Clark College before doing a MPH at Cal. 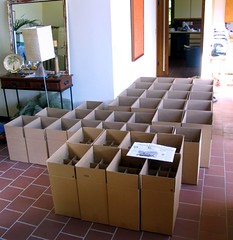 Empty wine boxes 18 June 2007
Originally uploaded by cpratt
This morning, my 38 empty wine boxes arrived. Tomorrow, I'll be packing my wine collection in the boxes and keeping it all huddled in the center of the wine cellar, awaiting transport to San Diego beginning next week.

When I moved up here, I had maybe fifteen cases of wine and it all fit in the Passat. Of the 38 here, I can fit maybe 16 into the Scion (if I'm very, very lucky) and have absolutely no weight limit left over for anything else. Part of me of course wonders what I was thinking buying so much wine, but my reasoning has remained the same (and I haven't bought any wine in about a year at this point)... I wanted these following things:

- every year 1 case each of Clonakilla Hilltops shiraz and 1 case of Clonakilla shiraz viognier (8 cases total at last count; haven't bought the '05 Hilltops yet)

- a wide selection of Australian wine from 2002, the year we spent in Australia (this makes up for about 35% of my collection)

Everything else is basically incidental. We've spent 2007 so far drinking down all of the stuff that won't age (or just won't last much longer), so what's left is very much the good stuff. I had the great fortune to be able to share many, many bottles with friends and family over the last several weeks; here were some of the memorable ones:

- 2001 Clonakilla shiraz viognier, which is still one of the most amazing wines I think anyone will ever drink. It's not as mind blowingly overwhelming as it was when it was young, but it's definitely to the point where its subtlety and beauty can quietly take you by surprise if you're drinking it with your best friends on a summer's evening
- 2005 Clonakilla s/v, which is breathtakingly beautiful in its infancy: an incredibly harmonic performance of basso profundo barnyard, dirt, and soil with the faintest of floral harmonics pinging off of the ceiling. Worth every cent
- 2004 riesling spätlese that Dan bought (a Terry Theise import; I should have written down what it was) which was honey, orange blossoms, minerals, slate, and a faint hint of an impending summer rainstorm all at the same time

And here were some of the not so memorable ones:

- 1997 Te Mata Coleraine, arguably New Zealand's finest red wine. Corked, undrinkable, and currently languishing in the Redmond sewers
- 2000 Te Mata Bullnose syrah, so boring and who cares? that no one bothered to finish it at a party
- 2003 Ridge syrah, sadly also corked

It's going to be a pain in the ass to get it all to San Diego while avoiding the Central Valley heat, and my body is NOT looking forward to schlepping 38 32-pound cases of wine, AND I'm not happy about spending $800 for a year's rental of a wine locker - but I am looking forward to sharing all of this with friends and family in San Diego. The first time Brian, Chris, Henry, Mikey, Dan, Tim, and I drink some of this together, whether chillin' in our generically spiffy Mission Valley apartment or maybe even on someone's back porch will be a very, very good day indeed.
Collapse