Today, I visited the documentation center for everyday life in the GDR (wonderfully planned and exhibited, and staffed by incredibly friendly people who really took the time to make me feel welcome). This was in Stalinstadt, er, Eisenhüttenstadt (lit. "steel mill city"), the first new city founded in Germany after the war, hard by the border with Poland. I have lots of pictures but again not enough time to post them all, so here's one: 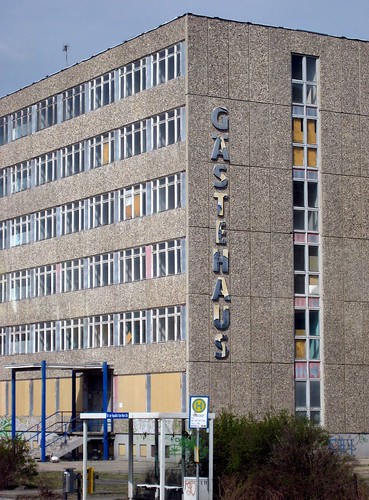 I don't know anything about this building, but it appears to have been a guesthouse. There was apparently a proper hotel in the old city center, but I didn't see it; the main street was torn up for repairs and I was short on time; as such I didn't see ALL of the city, but this picture is not representative of the entire place. Sadly, the first decade of construction in the GDR wasn't that bad (at least it looks pretty good even today, and the construction materials were better); it's just the 1970s and 1980s that give the place its deservedly horrible reputation for being amazingly ugly. There were far worse buildings I saw today, but I like this picture.

Oh, and one more for you:

Yup, some random beardy guy standing on the platform at Frankfurt (Oder) station. I went to the Kleist museum (yawn) and walked around the old city (also yawn). Definitely not my favorite place, and due to it being Easter, nothing was open and the train service was severely cut back, so I never did make it to Seelow or Buckow on this trip. Maybe next time?
Collapse