If you thought that last YouTube post was boring, wait until you see this one. I cleaned out my mobile phone this morning and found this video taken last summer of... wait for it... some of my drive home from work. Historically interesting for me, sure, but probably not so much for you!

This morning, I went out in search of the flea market on Boxhagener Platz; I'd read that they often had GDR relics for sale there. I didn't find it - even though I Googled it, looked around AutoRoute, and so on - but I did enjoy a nice long walk through an old part of East Berlin that's amazingly different than it was twenty years ago. Shops are everywhere, they look great, and most importantly, people were everywhere, filling tables on sidewalk cafés, having breakfast with friends and family, looking happy, having a great time. I can't tell you how different this looks than it did in August 1988.

Anyhow, here's a picture for you courtesy of my mobile phone: 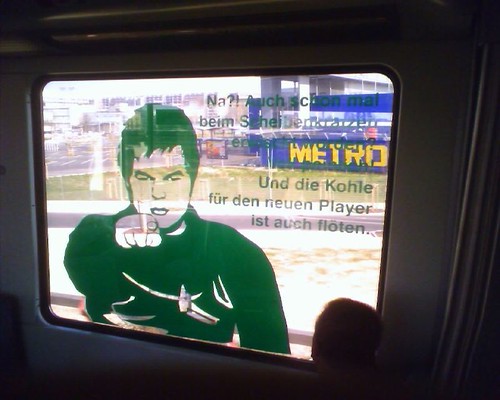 This was plastered over a window in the S-Bahn (urban commuter train). The translation is roughly as follows:

"Hey! You ever get busted for vandalizing train windows like I did? It's really embarassing. And you can say goodbye to all that cash you saved up for a new iPod."

Postscript: As luck would have it, my new map of Berlin from Zitty does show exactly where Boxhagener Platz is. I missed it by one block: the secret is that it's not on Boxhagenerstrasse, but one block south. Damn!

This is my mobile phone showing what it's like to get out of the U-bahn at Lichtenberg station and then fail to find the S-bahn platform (I should have just gone upstairs but didn't see the right sign).

Here I am futzing around with Dan's camera - look! it can record video! [This is intentionally silent, by the way, as there was no sound available in the museum.]

In late 19th century Germany, a movement arose known as die Freikörperkultur, which is a word you may have heard when you watched The Road to Wellville. Literally meaning "uncovered body culture," this is the movement which we English speakers refer to as "nudism." In the GDR, just as in West Germany, nudism is a fun, wholesome, thing that you can share with the entire family. Given that most of the film I saw on the topic today did in fact feature the entire family (read: prepubescent genitalia, which is so not a problem here and of course terribly beyond the pale at home in the USA), I edited it all down just to give you one guy holding two coffee cups and saying something that wasn't present on the audio track in the museum, so I muted it.

And here's another East German TV commercial, again without sound, this time for the Wartburg, one of the locally produced cars (it was more upmarket than the Trabant!).

Stop me when you've had enough... this is a random excerpt from a film of unknown provenance documenting East German architecture, presumably filmed in the 1970s in the GDR.

Here we have (again without sound, sorry) one of the most popular programs in East German TV: EIN KESSEL BUNTES, which I suppose you could translate as A POT OF MANY COLOURS (although believe me, that makes just as little sense as it does in German). I think Brenda Dickson may have taken some of her fashion tips from this video...

Right. Where to start?

Today, I decided I needed to get out of the train station (I left only briefly yesterday to buy some new shoes, go me). Apparently there was a flea market on with GDR memorabilia, so I decided to check it out. I left the hotel early, noticed I'd forgotten my camera, and then managed to almost (but not quite) find the flea market, so I returned to my hotel room to check the map and try again.

The second attempt worked out OK. Here, on the platform for S-bahn trains in East Berlin, I waited a bit for my train next to this delightful vending machine:

Hmmm. Only €1 for French fries, cooked with hot air? Uh, no thank you, especially without curry ketschup. Does anyone use these things? Or, rather, do any sober people use these things? You have to admit, though, it's brilliant that the fries are more expensive during prime drinking hours...

Anyhow, on to the flea market. Just before I got there, I saw the kind of shop that I assume

nfotxn would open if they all happened to live in Berlin together. Awfully cute designs at totally unaffordable prices, but the shop was busy and obviously successful: 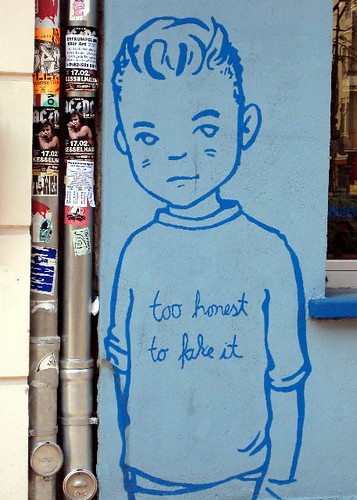 http://www.jujus-delivery.com/ has more of this sort of thing if you like it.

The flea market itself was meh, but I did think of

booddhabear when I noticed it was held at the corner of Gardner street: 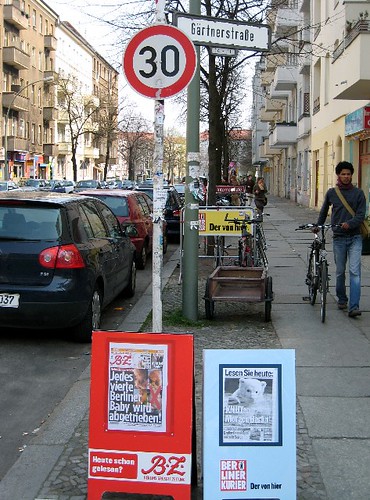 I love the two newspaper headlines below the street sign: the Berliner-Zeitung, the West German one, says "One out of four babies in Berlin is aborted!" and the East German equivalent, the Berlin-Kurier, has some puff piece about how awesomely cute Knut is (and he is!). Word.

From the flea market it was off to Berlin proper in hopes of taking my usual pilgrimage walk. When I first visited Berlin 21 years ago (!), you had to take the train to Friedrichstraße station, go through customs, and then head south from the station, turn left, walk by all the museums, and wind up at Alexanderplatz, where you'd spend your obligatory 25 marks and then head home, exhausted. I did the same walk in reverse today; it was a beautiful, sunny, warm day out and the streets had been closed to vehicular traffic due to a marathon, so it was peaceful and quiet, just like in GDR days (back then, there weren't too many cars on the roads).

First up: the Haus des Lehrers, or "House of Teachers." As you can see, there's now a huge building site in front of it: developers are turning Alexanderplatz east of the train station into a huge new warren of tall office buildings... 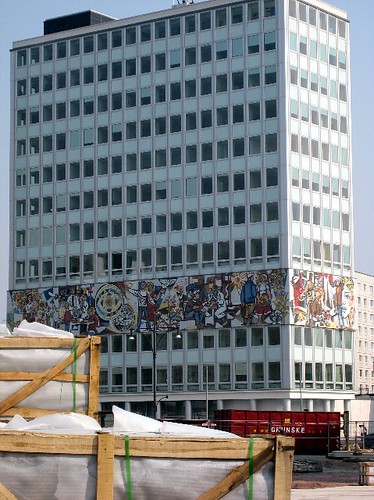 Next up, the Weltzeituhr or World Time Clock, a truly classic Socialist construct: 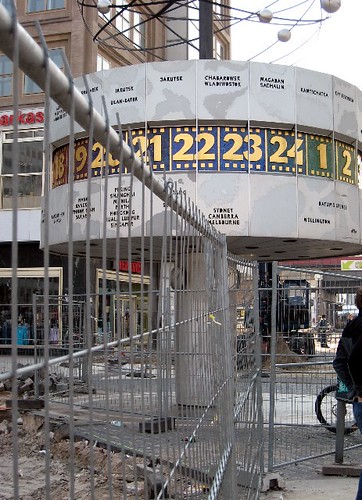 It too is now hemmed in by construction. It was here in 1986 that I bought a craptastic copy of The Communist Manifesto for about thirty cents and felt vaguely cool for having done so...

I was happy to see that Fred and Karl are still sitting quietly in the Marx-Engels-Forum, watching the crowds of tourist photographing them... 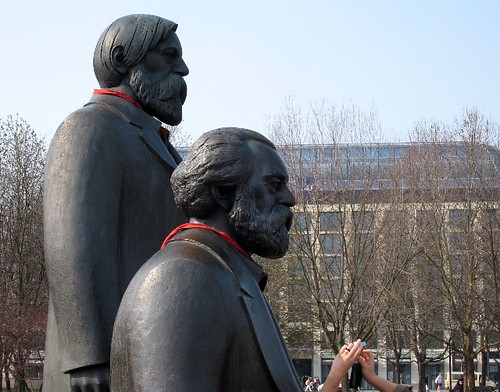 Just behind them there's a somewhat pollution damaged frieze that I only just noticed is actually kinda sorta gay...

And I was sad to see the remains of the Palast der Republik, the Palace of the Republic, the one-time East German building that contained not only the Parliament, but thirteen restaurants and a very sophisticated disco... 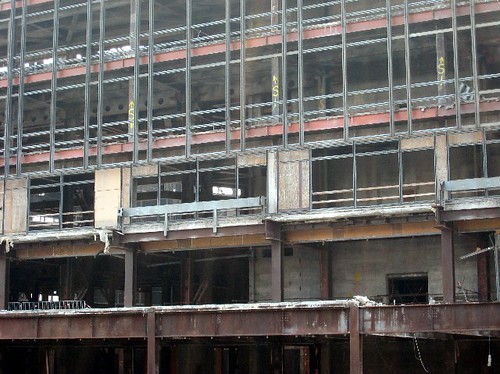 They're tearing it down carefully, working backwards from how it was constructed, and there's massive propaganda around the site trying to justify their decision to destroy the building, but I'm not having any of it. Dammit, I liked the place just fine, and there was certainly nothing else like it in the world.

The government has also tinkered with a few of the most recognizable monuments in that part of town: this small monument (it's waist high) proclaiming "eternal friendship with the Soviet Union" has had two huge slabs of glass attached to it that, frankly quite usefully, explain just what the hell the monument was trying to memorialize in the first place, which I didn't know until today: 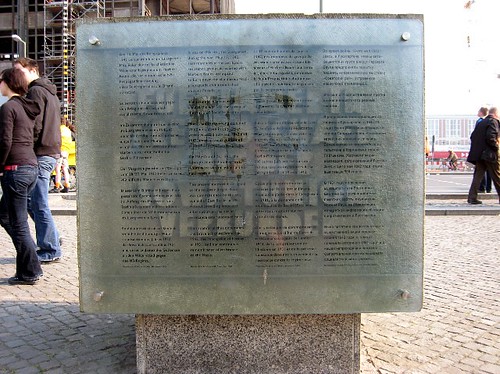 Apparently it's there to memorialize thirty Germans, mostly Jews, who tried to burn something down (?) during a Nazi parade (?). I really should Wikipedia it now but it's late... From here, walking further, I came to the German State Opera, which back in GDR times was somewhat well known as the only almost-gay bar in the GDR: the Operncafé or Opera Café next to it was said to be the place you could meet the locals for an afternoon of, um, conversation or perhaps even doing your part to prevent AIDS in the GDR (they always had a lack of personal lubricants and were said to be grateful if you brought any from the West). Strange times... now, there are huge billboards of Madonna next to it advertising her new H&M collection... 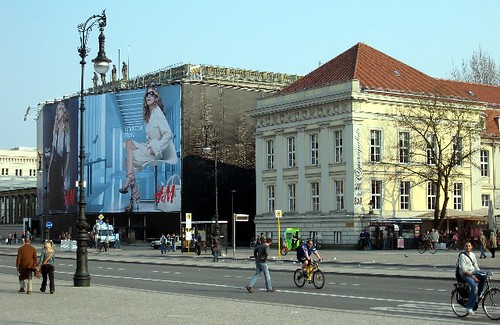 And finally, the last picture I have for you is this one: 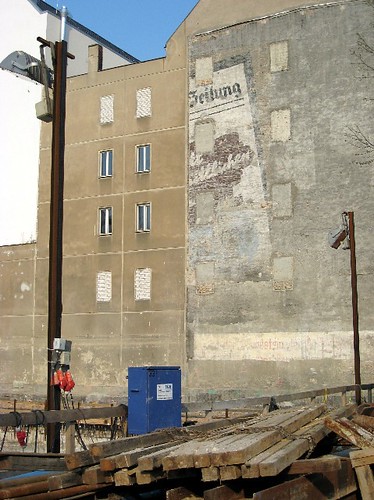 That's the Hotel Unter den Linden, which I wrote about here a month or so ago. It's completely gone, nothing left. From here, it was two blocks to the so-called Tränenpalast, or Palace of Tears, which was a large building glommed on to the side of Friedrichstraße station that contained East German customs - you had to say goodbye to your loved ones before entering the building. I remember the rabbit warren well, the strange interviews you sat through with the East German customs agents - it's all gone now, and there's yet another construction site there, although the original building is still hiding in back and is apparently a theater of some kind now. Just before you got there, though, there was a building on the right hand side of the street with one last café where you could get rid of the last of your Ostmarks - and guess what's there now?